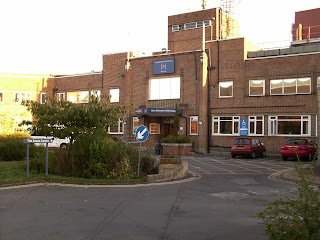 so iv been pretty chilled out about this harefield talk, its always been talked about for a long time now, constantly been waiting for the letter to be sent from the Brompton to them and to be honest I don’t actually no when the referral letter was sent but I received my appointment through the post and after thinking I was pretty chilled about it all and didn’t really affect me, when I opened the letter my true emotions were revealed! My eyes filled up as I read first meeting with dr carby on the 7th December! I was excited but felt sick at the same time…just ment it was all really happening now! So I ran in to lee to show him- he was completely oblivious to my reaction lol then rung my mum and told her and she was over the moon then asked me how did I feel and that’s it I started crying…she always manages to do it to me lol. It was good tears just nervous I suppose, I just take things as they come and don’t really dwell on things too much but this is big stuff!
Anyway I knew my weight had to be good for then and wanted to be at my best when they saw me so they couldn’t say no…
Not long after a few weeks I think I received a call from harefield saying that they had to cancel my original appointment and could I come earlier on the 23rd November…I was delighted as I was eager to get there to meet the team and see if I was suitable.
After this phone call my emotions really started playing with me, it was all I could think about all the time…then I started to doubt if I was ready, or am I ill enough is this the right choice to be making I went into complete panic mode!
Just sat down with my mum one evening and burst into tears felt good to let it all out, she said I don’t need to do anything im not comfortable with, which I knew and transplant was defo what I wanted there was no doubt about that I was just terrified.
So the 23rd November came, turned up to the hospital at bout 8.30 with butterflies in my stomach! I was so nervous it was crazy, hospitals never bother me!! Lee and mum was with me laughing majority of the day which at the time I was getting agged with-.it actually did calm me and love them both for it!
Met brian the transplant coordinator and i was a nervous wreck lol and one thing he said to me which played on my mind and got me worrying was that because I was small it would be an issue and would be waiting a long time for lungs L
Had a few tests done the norm had loads of bloods taken which I would have to wait 2 weeks for the results, met dr carby who was so lovely made me feel relaxed and took away or my nervous feelings, he said I was suitable as long as nothing funny comes back in my results etc and had to wait for bloods to get back and then they could book me in for my full assessment, but as it was near to xmas it would be more like feb 2012 before I could be brought in.
Anyways 2 weeks went past and got my phone call from brian with good news all my bloods came back good so could go ahead and get me booked in for assessment…bad news was the earliest I could get would be march! Unless he got a cancelation L was gutted just felt so long away…
So although disappointed I was planning for march, had loads of things going through my head, was going to try get a little holiday in before, make lee take me to paris etc
Friday 9th December,As we was driving up the knutsford for the weekend (me and mum) we get this phonecall ‘unknown’ my instant thought was harefield so we answered on the handsfree in the car and as I thought it was brian the transplant co ordinator, there had been a cancelation and as I had made it quite keen to them I wanted to get in as soon as I could he was ringing to ask me if I was free the following Monday 12th December for my assessment…I was in total shock and obviously said yes!
As there was no time for him to send out letter I had no idea what to expect, all I knew is I was goin there at 9am Monday morning and staying for a few days so they could do all the tests.
So I started panicking again, I wasn’t mentally ready for all this that quick I was expecting march.
I didn’t really have time to think too much as we was on the way to Nicolas and spent the whole weekend there.
So Monday morning came, mum and lee came with me. 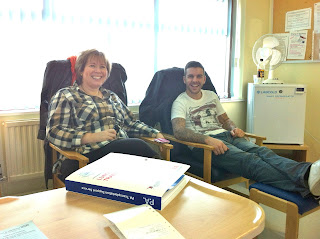 I was put onto F East Ward. I had a lovely nurse…I think she was the sister..cant member her name but she really was lovely,
She told me All the tests I was going to have done and then the thing that I found the worse out of the whole assessment… the wee jug!!
Not only did I have to collect my wee in a jug for 24 hours…I had to walk down to the toilet down the corridor with it on display! Lol embarrassing oh and to top it off, the whole on the lid of the jug was the size of my strawberry water lid…tiny considering I had to pee into it, and I didn’t get a funnel or anything nope I was offered a bed pan..and even that had no way of sieving it into it…the whole experience was not delightful…so lee came up with the good idea of peeing into a cup and then just pour it into the jug! Was the easiest option for me!! 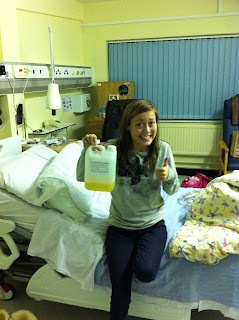