A day i wont forget quickly!!

Firstly want to start the blog with a little RIP Sean! sadly its been 10 months today since we lost him, he didnt have CF but was a close friend of mine and not a day goes by i dont miss and think about him! would do anything to have him and josh back! :( RIP the miles brothers xxxxx

right so today was my first day on the lovely Foulis ward Room 2 at the Royal Brompton Hospital!
the days started with being half asleep and having a stupid needle prick on my finger to test my blood sugars. there always fine but its routine they have to do this for the first 48 hours! they were supposed to be monitored all day...iv only had one, i think due to the fact they have to do them before or after i eat but as the kitchens SO far away i didnt eat anything til about 4pm lol BRILLIANT!!
to be fair i had a lovely nurse who offered to heat my food up whenever but in between nurses doctors physios in and out and her having to not only look after me but others and do there ivs it not that easy to time it right!

i had planned to go to celebrity juice tonight with mickey and lee, because of work lee couldnt go but bianca took his place :)
we had to be there at 6....but before that i had the battle of persuading the doctors to let me out....there normally pretty cushtie with us patients going off the ward as long as its not when drugs are due and were well enough to...the battle for was the fact i hadnt even been in hospital 24 hours yet!
but after working the george charm and having the wonderful georgie as the doctor she said its a one off as i was so excited and "lifes too short" i was over the moon! alothough explaining to her what celeb juice was i found out to be moved differcult for the pure fact she doesnt own a TV!! wtf! so i might aswell have just been talking to myself! lol

anyways i got myself ready, took a while, this room is freezing!! and my shower is a joke...its bad enough having a shower as i find it better to have baths but this shower doesnt even bloody work properly!! the curtain doesnt go round...the shower head doesnt go on the bit its ment to so i basically had to sit at the bottom and use the shower head like a gomey! and i had a lovely draft coming through the vent! the whole experiance wasnt pleasant and has put me off washing...so if anyone comes to visit be i might need to go for the festival wash for the next few days with baby wipes, i cant hack the ordeal! i get tired washing normally let aot when its cold and differcult!!
im keeping a note of all these things so i can have good reasons for them to move me!
this is my shower! 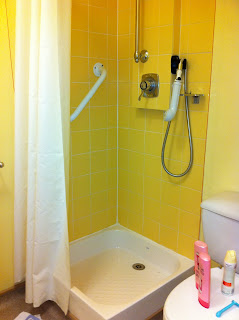 seen as tho i love taking pics got a random photo of theguy checking my pipes!! lol 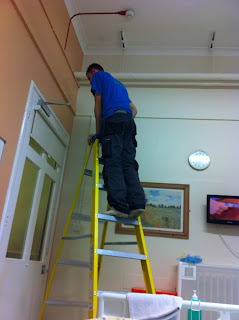 lastly and most importantly Celeb Juice!! it was amazing!! best tv thing iv seen live ever!! we was so lucky to get in, so many people were turned away because it was so full!! and we got special treatment...well we got seated first and right at the front all because im gomey :) comes in handy sometimes!! was really good people on there... obviously keith lemon, ferne cotton, rufus hound and holly willobooby lol but phill schofield was on hollys team along with christine bleakley and chris fountain was on fernes team! was hillarious! had a reallt good night!
completely clapped out now! looking forward to seeing it on tv 2moz, see what they put in!
finished just after 10 so bianca took me back after stopping for a cheeky maccy d's!! so glad mickey asked me to go! true legend!! will ahve to return the favour somehow.
so all in all good day! looking forward to resting tomorrow and for the rest of the admission, lots of sleep, lots of drugs, and hopefully lots of food!! get these lungs all better! or as good as they can be.
oh and see these lovely hummingbird cakes i walked into on arrival back to the hospital, was pretty  chuffed! we gone from krispy cremes on wednesday to gorgeous cupcakes!! defo impressed! 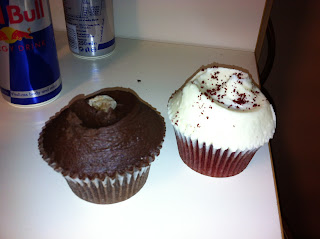 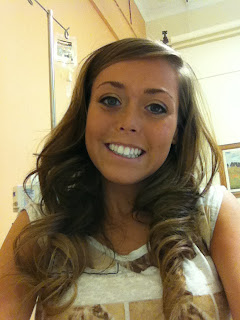 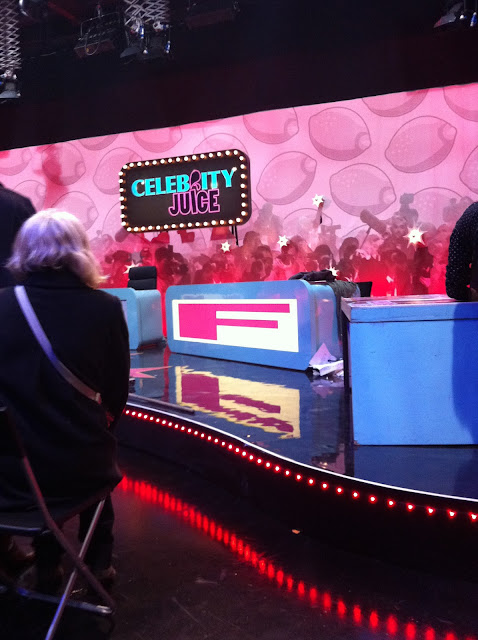