Think its safe to say that last night completely wiped me out, which i was expecting to be honest! i hardly did anything i literally walked slowly down to car with oxygen on...was driven to riverside studios by the lovely bianca in her big beefy car!, then pushed in wheelchair to enterance...also with oxygen on and then sat down for the evening...although did join in a little bit with the first lot of dancing but when it came to the second time round me and bianca decided to sit that one out! lol but that was it. was only out of the hospital for 4 hours and its completely wiped me out today.

ive had a pj day and hardly moved out of bed :)
woke up this morning with my lungs aching, had the worst chest pains, felt so sore...it eased as the morning went on, either that or i got use to it...il go with it eased away :)

my lovely reflexology lady sarah who visits most of the patients on the ward poped her head in around 1ish and iv never been so happy to see someone! she makes u feel amazing! shes a little touch of heaven!! 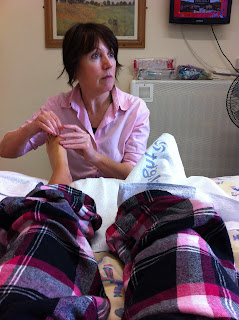 she was in here for ages it was great. when she was coming to the end it was cut short though as my consultant dr bilton and her crew came to see me. i completely forgot she does her ward round on thursdays.

we had a few interesting conversations. dont think she was keen on the idea that i went out yesterday, but tried to brush past that subject as dont really wanna upset her or piss her off!

then shes sugested that i see the Palliative care team!! well that word just freaks me out....she said she trys not to call it that and did tell me what she likes to call it but completely forgot probably because iv got this one stuck in my head!! the first thing i think of when i hear this is like they use it for cancer patients who are dying and there nothing more they can do so they make them feel comfortable!!
even google says this "those living with chronic diseases, as well as patients who are nearing the end of life"

well i most CERTAINLY do NOT see myself in this situation!! ok i know back in the summer i was told i only had 2 years left to live with my lungs probably but im a positive person and take each day as it comes so giving up is NOT an option for me!!
so this team starts alarm bells ringing in my head!!

they mentioned it to me before at the harefield asessment but i was all smiles and took the womans card and just dismissed the conversation...didnt ask many questions and just hoped the woman left my room as soon as possible lol and now its come back to haunt me hahaha im making this sound so dramatic! its really not!!

anyways so iv agreed to see a woman from the team called jackie, and have been promised she wont come in covered in a black robe and with crosses and stuff! hahaha were just going to "talk" about my options and about the pains in my chest and to see if i want anything....

but i feel that its good sometimes to feel a bit of pain, to me it feels like i know when i need to do something about it, for example if i couldnt feel any pain how would i no if my chest was bad or not? i have good and bad days all the time and when i start having more bad days eg with more pain i no i need to do somehting about it! oh its all so confusing and hard work!!

also had a slight nag about my weight.... but promised i would do my feed tonight which i am doing as typing!

after i saw the docs i had a visit from my favourite dietian!! kate!!
so going to start this thing called calogen or something?? apprantly for every 120ml it has 800 calories!! thats crazy defo need this in my life!! so with normal food that and feeds il be a fatty in no time ;) hopefully!i need at LEAST 3000 calories a day! lol also shes going to get them to do blood tests to check my vitamins etc make sure im on all the right stuff!

so yeah just spent rest of the afternoon being entertained by miss miller sending me voice recordings! if i could get them on here i would...although dont think it would sound as funny and might be a bit cringey!!

then also got this very little text from holly haha...its not what you no its who u no!! ;) 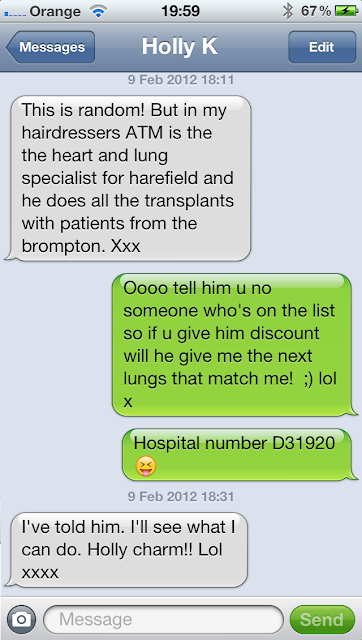 so thats me for today

love love xx
Posted by George aka Sprog at 20:27