Eventful few days and scariest moment of my life!

Today has been the first day since last week that i feel half normal again!
last few days havent had the energy to think let alone blog!

So the dramas started on thursday! was having one of those lazy days at home, couldnt be bothered to get out of my pjs! felt quite tired and had quite a few chest pains going on. i started the morning coughing up blood, it wasnt much just a bit unusal for me, i never cough up blood and in the past if i had done its only if im coughing too much or too hard!...in this case i wasnt doing either, so was a bit confused, anyways as usual i just brushed it off and didnt make a big deal out of it!

as the day went on i realised it wasnt a good day for me, it was more than just being lazy, my breathing got tighter, chest pains were sharper and felt rubbish, mum was a bit uneasy about leaving me on my own, id arranged to see daisy in the evening but it got to about 7 ish and decided i needed mum to come over, didnt feel right or safe being on my own and i was coughing up more blood.

seen as though theres no A&E at my hospital "the brompton" in london we had no choice but to go to st peters and for me to actually agree to go there was saying something, i HATE the place, i feel like i know more about medicine than half of them there!! there clueless most the time! but at least it was a hospital!

so off we went, firstly no disabled spaces left, prob taken up by fat lazy attension seekers who go to a&e for a headache! lol (i really hate a&e and the misfits that go there and waste nhs time!)
oh and also the people who smoke at the enterance, dont mind me coming past in a wheelchair and on oxygen...people have no respect! lol rant rant grrrr lol

so signed in, still no my hospital number from being there as a child lol and explained how i felt and was told to wait to be seen. i hate waiting for things, and had eyes just gorping at me, was definatly out of my comfort zone! then a male nurse calls my name...whoop finally!!

he asked if he could take some bloods which was fine....then he pulls out a MASSIVE needle so i was like ermmm can you get a smaller needle please, and he trys giving me some bullshit about this being the smallest needle bla bla so told him to go to the peadatrics to get one and apparrantly they use this ones on the babys, i was insulted as if i dont no what size needles they use in hospitals, he was so stubburn and i knew he werent backing down so i just maned up and had the beast of a needle and decided to hate him and curse him in my head! lol the prick! bet he got bullied at school!

then i had my blood pressure and sats etc done and another nurse asked what was wrong with me so i explained i had cystic fibrosis and how id been feeling, so she acted like she knew what CF was then asked me was i on CHEMO?? wtf? so clearly she had no idea what CF was and in her eyes i was a cancer patient brilliant....i think pre judging st peters may have sounded like i was being a bitch but as usually i was proved to be right! haha

not long after i was taken through. thankfully i was seen by a doctor who had actually read my notes and knew what CF was and he had seen i had been a admitted a few years ago. he asked how i was and put me on sats machine to check my oxygen levels, they were hovering around 88% so he wanted to do blood gases, i had prepared myself for the idea of blood gases and im over it all now, so he went to get the bits. my sats started dropping and nurse came in and went out and said u do realise her sats are 85% and they were dropping and mum started worrying then so she went and got someone to sort out oxygen as there were down to 83% and the machine was bleeping away, it gave them a little kick up the arse they started running around then and he came straight back to do blood gases, ecg and chest xray once id calmed down. had me on 10litres of oxygen but was a mask so it doesnt work out to be as high or soemthing i dunno all confuses me lol anyways was a waiting game for next few hours for bloods etc, i didnt wanna stay in i just wanted to make sure nothing bad was going on in my body.

where would my blog be without a piccy! altho mum taking a pic of me lookin rough as....and very unimpressed! lol 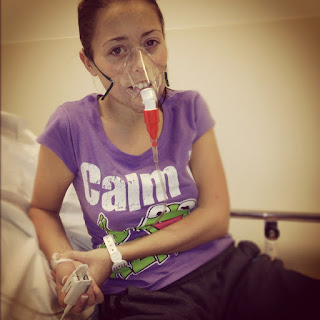 just before mid-night he came back that my crp levels were 100 and it came back that i could have a blood clot but he said that comes back poisitive if my infection levels were high and could send me for a ct scan, but iv never had a blood clot before so we both agreed its prob the infection and he let me go cause i said id ring the brompton the day after to get up there to start ivs. so left just after 12!
which i have to say is when A&E starts getting exciting everytime there was a bit of drama my sats got better hahahaha but was glad to be leavign and get some sleep!!
stayed at my mums didnt wanna be on my own.

so that was thursday then friday came- sorry for the essays!

went up for clinic, sats were 85% and lung function was 12% weight wasnt too bad though was 38kg!! its always one or the other with me! lol

although i had bloods and xray all done at A&E i had to get them done again so they were on the bromptons records. but saw my consultant and thankfully there were no beds ;) i didnt want to be admitted yet! it had only been 20 days since i left that place! wanted to do home ivs, so he agreed to let me, so went up to lind ward which is the day unit to get my portacath accessed and be assesed doing my own ivs so all was going ok drew up all the drugs explained i knew how to do it all and what to do if i started feeling funny or react etc, its never happened so i dont worry bout stuff like that!
they put me on tobramycin once a day and Meropenem three times a day and ondansetron three times a day for sickness. all of these i have been having for YEARS and YEARS!
i dont have any problems and im not allergic to anything....or so i thought!

so my tobi had already gone through, the nurses changed over who was assesing me but i had already drawn all the drugs up just had to push them through, so new nurse was sat there chatting to me and mum making sure i new what i was doing, pushed the ondans thru was fine then slowly pushed thru the meropenem, then i started flushing, i think i must have pushed about a 1m thru

and all of a sudden i went dizzy, just the top of my chest went so hot i cant even describe how hot it went felt like i was on fire, i threw the flush into the tray and my breathing went tighter and tighter, all i kept saying was i cant breathe i cant breathe and im so hot my chest my chest made everyone feel it but they couldnt feel anything cause it was inside of me, eventually it felt like i basically couldnt breathe i was panicing so much

i honestly thought that this is it...im about to die!

i no it sounds dramatic and its not like me at all but i swear to god i thought my lungs had just stopped working and shut down, was the scariest moment of my life, my sats were dropping so much had nurses running around everywhere mum was next to me i went completely blury and just remember mum saying calm calm breathe seeing my sats dropped to 77 i was terrffied and i just listened to everyone,  and started breathing as much as i could then i cud see my sats slowly go up, iv never been so happy to see them in the 80's hahaha remember my body starting to relax when i felt everythign opening up again, had tears coming down my cheeks. was so horrible, had drs, nurses cf nurse and consultant rush up. was horrible, even thinking about it now scares me, never in my life do i want to go thru that again! id rather have my lung collapse 100 times than go thru that again! my temperature had shot up too and took ages for it to come down, they gave me antihistamine.

but still there were no beds and after all the drama a few hours later i was ready to get outta that place! if there had been a bed theres no way they would have let me go the nurse said and she didnt want me to leave, but as lovely as she was, she began to annoy me after checking my blood pressure every 10mins and temperature lol just wanted to go home.

so i didnt go home with ivs i had to go up again saturday to start ceftazidime (cat pee smelling one)
was scared at the idea of starting that incase i reacted like i did to meropenem! but all was ok and was up the hospital again on sunday for tobi levels!

so this weekend i have been exhausted and wiped out, feeling a bit more normal today, just all a bit scary really, and nothing really scares me normally im a tough cookie!

so yeah thats all the dramas in my life....im hoping for a bit of a chilled one this week, obviously after the anne summers party 2moz with my girlees hosted by lauren!! ;) haha