Well I didn't think through the Easter weekend! Weekends are bad enough in this place, there so boring and quiet and the staff are lazy too :p lol but having an extra two days added on top of that was literally torcher for me!! It's basically two weekends together ahhh

I'm not so hard done by I did manage to get out for the afternoon on Friday and Sunday so I am being a bit dramatic! Lol

I didn't celebrate Easter this year, 1 it's completely pointless even growing up as a little catholic girl I hated it, the only good thing when I was younger was we got two weeks off school! And as my mum hated me missing school 9/10 she would get me in hospital for a planned admission to keep me well haha evil woman ;) I don't like choc so it's just a bit pointless! Not like I can go out raving on the bank holidays anymore aswell! Lol

Another reason why this year mainly I didn't do the whole Easter thing is it was 1 year anniversary of a close friend of mine who passed away! Wasn't Easter Sunday it was Sean's day in my eyes!! Words can't really describe how much me and everyone around misses him and josh. And they say times a healer...not sure it always is, maybe if the person was suffering or was old and had lived a full life, but 24 and 21 is far too young and not right in my eyes! I truly believe everything happens for a reason, but in this circumstance I still don't get why!? Still haven't got my head around it and get so upset ESP to see the pain others are going through and knowing there's absolutely nothing in this world you can do about it!!

So today I'm finally leaving, feels like Iv been here forever when actually its only been two weeks in hospital but 4 weeks of ivs. My weight is now 40.6kg :-) they reckon about 1kg of that is fluid though. Sats are between 88-92 off oxygen feel good lung function today was 17% which obviously had gone down from 21% but I knew it would as I'm only on 5mg of steroids now and that's only for next few days then will be completely off them.

Decided to leave the NIV for now, they did blood gases yesterday morning and it came back that my carbon dioxide levels were a bit on the high side so the NIV would be helpful and they think it will prevent me having to come in for admissions as much but as I'm well it's not best time to try it so that's the plan for my next admission. Which we are going to try to plan for next 4 weeks unless I get unwell before orrrrr I get the magical call ;)

Been thinking a lot as I was leaving the ward today saying bye to people like imagine I could be saying bye for the last time and might never go back to that hospital if I get a call for lungs... You never really no what's going to happen...

Be a lot of the staff I will miss when I go to harefield in the future, you build such a bond with people, and so use to a certain way of life! Everyone nos me up at the hospital even the ambulance drivers and I never go in the ambulances!! Just get to no everyone!
Either way it will be a good change! And will build new bonds!

Had all new oxygen delivered today straight out of new boxes all shiny and new!! Nice shiny crome liquid oxygen tank!! Love a bit of Crome!! And also had a lovely smaller and much quieter oxygen compressor delivered too all good! Nice to be home but got sooooo much to do, the next few weeks are gonna be mental!!

Il attach some piccys of my new oxygen bits

All for now love love 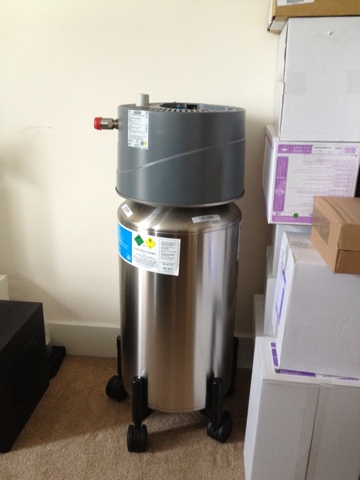 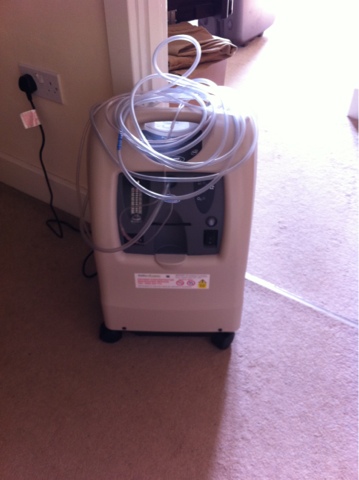