Well had a crazy few days!!

Firstly i tried the NIV machine, have to say i no its not for fashion purpose but OMG it is the most unattractive thing EVER!! what a catch il be at night time!! been debating weather to put a piccy up but thought fuck it, i want my blog to be as real as poss even if i do look like a complete and utter mong!!- dont really care what people think anymore ha!! 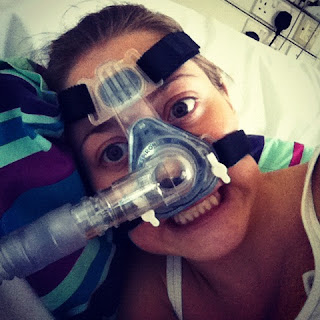 
Now about the medical side of things.

At first i took quite well to it, the head thing as you can see straps around my head, its not the most comfortable thing in the world, and the actually bit where the air and oxygen goes into is where the nose bit is!
decided to go for just a nose mask as i think i breath through my nose when im asleep!

first night i tried it i managed to get to sleep for an hour i think straight but when i woke up i had to take it off, my lungs were aching so much and at first felt like i couldnt breathe, could not stop coughing, it felt like i had literally done physio constantly on the bird machine for ages, felt alot longer than an hour!
so decided that was enough for that night and went back to sleep without it.

since then iv been a bit put off by it, i need to man up as there quite keen for me to use it, but it took a good day for that pain in my chest to go, it was a weird pain it just felt like my lungs had done a full on work out not as if i had an infection kind of pain, prob the most my lungs have breathed in ages!

i suppose its like someone who always goes to the gym.....if they were to stop for a long time like a few months, then decided to go for an hour one evening and do a full on work out like they would before they would be in alot of pain...

but the only way to get past it is to carry on going to the gym and build it back up again, so thats what im going to do with this NIV machine, im not giving up, just going to use it little and often to build me up until i can get use to using it all the time at night!

My sickness has been the devil to me this admission! my cyclyzine iv was taken away from me on friday after seeing my consultant, she absolutely hates me being on it, and she changed it to a slow infusion of levomepromazine, so had to have a tiny needle in my stomach chub, about the only fat on my body lol 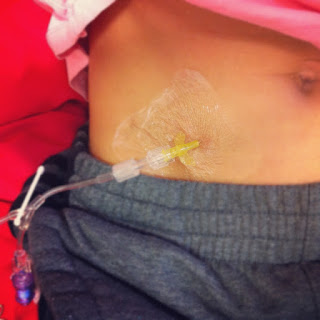 had this needle put in friday night, didnt really feel much of a benefit from it but gave it ago, although woke up saturday late morning and the needle had fallen out in my sleep, so couldnt be bothered to have it put back in again, so just sticking this sickness stuff out as there not giving me anything else to help!

Now onto the good news!

like i said i saw my consultant on friday afternoon, and before she left she started telling me about this drug there going to start me on as long as i agree obviously.

at first when she was telling me about it i got completely confussed with numbers she was throwign at me it was my gene type etc and the name of it and what this tablet does etc i was complete confused thank god my mum was there it was a complete info overload for me lil brain!!

but basically i kinda understand now!

there was alot of stuff in the news about "gene therapy" not long ago for people with cystic fibrosis, i didnt really take much notice of it as i knew it wouldnt be any use for someone like me, i thought i was way pass the point of "saving" if you like lol but thought it was amazing for younger people with cf, they will have a much longer healthier life!....

well turns out i was wrong!!

the drug is called Kalydeco.

and its only for people with CF that have the gene type G551D which luckily enough i do! :)
its not licenced in the uk yet, but have been told by my dr that they have gone to the company and whoever they have to, to get authroised or whatever but have asked if i can have it on compasionate grounds as my health is so bad now!!

theres only 6 patients out of 700 at my hospital that will be having it, so i do feel very lucky!!

and when my dr was telling me about it and how great the studies have showed the first thing i said to her was could it get me off the transplant list???

she said lets not jump ahead of ourselfs as it wont undo damage that has already been caused in my lungs but it means that it could/will hopefully stop me from getting any worse so it will keep me well and stable whilst waiting for my transplant call....

that alone i am happy with if it means i can have some sort of livable quality of life back...

but im aiming and wishing for so so so much more!! i want it to be able to get me off the transplant list, i want to be well enough to be able to go on nights out with my girlys, i wanna be able to go on holiday with lee and family and get a mega tan and not have to rely on oxygen and wheelchair i no this is stuff this is more realistic post transplant (not the tannign part) but they say this drug is closest thing to a cure!!

you never no im thinking positively even if its wishful thinking!!

im so lucky to be given this chance, so fingers crossed its works....and apprantly its costs around 100k a year per person whos on it!!- see im not a cheap bird ;) lol

heres a bit of info i found off a website about the drug.

How does Kalydeco work?
In people with the G551D mutation of CF ages 6 and older, Kalydeco helps improve the function of a defective protein, called CFTR.
In people with this mutation, the defective protein moves to the right place at the surface of the cell but does not function correctly. Instead, it acts like a locked gate, preventing the proper flow of salt and fluids in and out of the cell.
Kalydeco helps unlock that gate and restore the function of the CFTR protein, allowing a proper flow of salt and fluids on the surface of the lungs. This helps to thin the thick, sticky mucus caused by CF that builds up in the lungs.

oh and another great thing about it is....its only a tablet you take in the morning and evening!! sweet!!

so hopefully il find out next week more about this and keep everyone inform! as its not licenced in uk yet i have to sign consent forms with my dr so i understand etc why im taking it bla bla bla

other than that i finally got my ng tube down today and weights only 37.2kg so not as bad as i thought it was going to be! :)

defo happy sprog at the moment!! my life seems to finally be falling into place, bungelow is coming along amazingly thanks to my lee!! hes been a proper star at the mo! and mum and dad have cleared out my flat and all three of them have moved all my stuff over to the bungelow so ready for tuesday when i completely have to be out of the flat, weird to think after 3 and half years i wont be going back there!! but so exciting at the same time!!
and im just chilling in hospital why they all run around mad after me, true george style! ;)