The Future Mrs Compton! & ANOTHER set back :(

Sorry i havent blogged sooner the reason being is ive been pretty pissed off about the whole Kalydeco situation il explain whats happened...

so Friday the 13th came the big day to start the Special K! i was sooooooooooooo excited and done everything i could to keep myself occupied in the morning until 10am came! mum got up the hospital early so i could get myself all packed and ready as i was being discharged from hospital that day aswell!!

i was absolutely knackered as i had a really bad nights sleep, i had set up my feed and gone to sleep and woken up about 5am that morning and thrown up all my feed up! i was so fed up just made me even more keen to get that kalydeco down me!!

so had my morning ivs, had needle taken out and then watched that clock minute by minute!!

then it came 10am!! finally i could take my first dose of the wonder drug! and obviously i captured the special moment..... 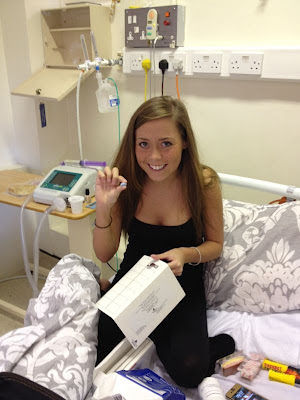 it was weird taking it to think what could this drug be doing that precise few minutes like i could just imagine it dissolving in my stomach and making its way to all the right parts of my body and repairing that faulty gene of mine!!
i took it with two slices of angel slice couldnt leave the hos had too much to pack up still and they wanted me to hang around incase i reacted! and to be fair i couldnt be bothered to sit in a cafe i was far too tired!

when we was aloud to leave i decided to bring a little pot in the car on the way home incase i decided to cough my guts up on the way home, i was being prepared for anything....i got a bit carried away pacing about the ward without oxygen and kinda knackered myself before i got into the car so spent most of the journey on oxygen haha il never learn ;)
got back to my mum n dads to chill and i dunno if the drug would work that quick or weather it was my mind thinking it was the drug but all of sudden i literally couldnt stop coughing up, i was knackered form coughing so much so part of me thought mayeb it was the dnase from the morning but its unusually for it to be like that mmm
then went back to my house, mum unpacked from hospital etc and i sat catching up on katie price :) then she went home and i had to keep a pot beside me as yet again i couldnt stop coughing up but this time it was sooo much looser, again could ben reading too much into it but this is what happened!

i had a few missed calls from unknown number and listened to my voicemails and it was one of the shos from the ward had been trying to get hold of me...i didnt call back cause i thought well if its urgent or somethign was wrong he would have said in voicemail...typical me!!

then lee came home and we was chatting for a while and cut along story short- were now engaged! :) happiest girl in the world and totally unexpected so tht afternoon was on a high because of that...then i get a text form my mate whos still in hospital saying the drs want me to call them urgently arghh couldnt ignore them this time so i ring....

basically i was told i wasnt to take that evenings dose of Kalydeco...i could feel my face going red with anger!! not again!! i had to wait 5 days to start it again as they had given me fluconazole whilst on ivs and i cant be on that drug and on Kalydeco, i was sooooooooooo mad! i said to the drs whilst i was in there that i didnt want to be given ANY drugs that would affect me starting kalydeco!! i was fucking fumming!!!
set back after set back and after thinking that this drug had already started to work its magic!! luckily enough i had forgotten to take the fluconazole on thursday and friday, so have to stop having it for 5 days before i can take kalydeco again so that would make it tuesday dr said but im going to start it monday! its out of my system now and im sick to death of waiting....
im still on edge about what i should and shouldnt be on and feel like i cant trust anyone at the moment and as its been the weekend i couldnt speak to my consultants so this weekend i know its bad but iv not taken any of my tablets apart from creon so that i can speak to drs tomorrow and know exactly where i stand!!

so had some good and bad news but im REALLY hoping to have some more exciting and positive news for my next blog regaurding Kalydeco!

and hopefully as soon as i can get this drug in me and working and get my lung function and sats right up and my body in tip top condition im planning to get married on a beach in spain!! :)

also heres a touchy and beautiful Video made by kirstie please watch and share and SIGN UP for ORGAN DONATION!!

also cant finish a blog without a little piccy of my pup mason at 7 weeks, we get him this friday!! very excited!! 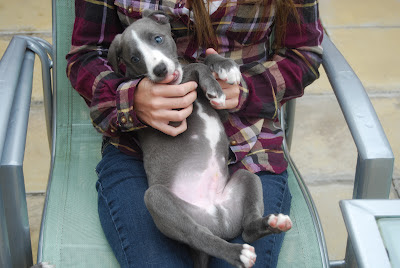 thats all for now!!