So my last blog turn into a complete rant..sorry about that, back into reality now and not focusing so much on being the "ill person" means things begin to pee me off again! haha

So i finished my two week course of ivs end of last week and was up at the hospital on friday to have lung function and fit to fly tests done!

well my appointment was at 9.30am which was hard enough as it is being up that time, let alone being in london and about to basically do a work out for my lungs!

i havent done proper lung function with all the fancy machines since may 2010, i find them so much harder than the usual ones you get in clinic, and they always push you soooo much its a killer!

my results from that came out that my lung function was 20% which was a bit disapointing, considering after two weeks being on kalydeco my lung function was 23% and pre ivs it was 21% so its not exactly going in the right direction at the moment..but it could be so much worse therefore i cant complain too much!

im hoping im just having a rough patch at the moment and this will pass and il continue to start increasing again, im still bringing up Loads than i did before K and the whole point of this tablet is to thin the mucus and mine is no where near thin yet so im guessing my lungs are still in the clearing out stage! its not even been 3 months yet! and lets face it, im not on oxygen and not in a wheelchair so that alone is a mega plus!

I caught a cold over the weekend thanks to mr Lee passing me his lurges!! haha so thats been a bit of a knock and still feeling pretty rubbish from that, poxy dry cough, headaches, feeling exhausted- no fun!

Had some really sad news also this week, a childhood CF friend sadly passed away peacefully in her sleep early hours of the morning. this came as a bit of a shock to me as i was unaware that she was so unwell and hadnt seen her for many years, we use to go to the same hospital as children but as adults i went to the brompton and she went to frimley, so the last time i saw her was in our local shopping centre where she use to work in mc donalds! she was always a bundle of fun and as a child myself her and bianca would get up to mischef on the childrens ward...running away from physios, hiding in cupboards, squirting the nurses with seringes full with water and throwing water balloons made with gloves at the nurses and staff!! and not forgetting the wheelchair races at early hours of the morning because we would refuse to go to sleep in our rooms!!
quite frankly we were little shits!! haha lots of good memories!
I think she got quite ill after having her little boy this year and never really recovered as well and had spent the last 3 months in hospital. my heart goes out to her family and her beautiful little boy which her memory will live on through.

This last 18 months has been horrible with friends losing there lives to CF, all young girls from the  age of 18-26! its been so heart breaking and just shows how awful this illness can be!
how ever this gives me the drive to be more positive and fight harder!
i never thought 6 months ago id be feeling how i am today without a transplant or if id even be alive and no1 nos what the next 6 months will bring!

onto some less depressign news!.... finally wedding plans are coming together and i finally got my engagment ring! which i loveeeeeeeeeeeee so me!! and its so tiny, litterally the size of a 5p lol
heres a little piccy 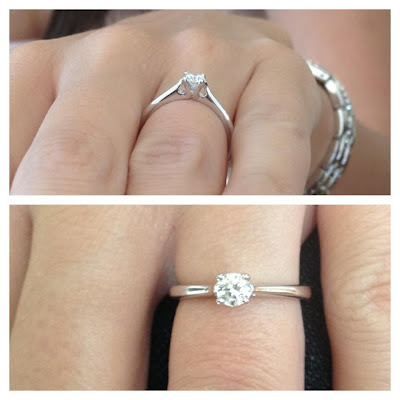 also have my wedding dress just getting that altered this week cause im a midget lol, and then just to bring on the 3rd november!!
less than two weeks till im off to spain which i think im more excited about than the wedding hahaha cannot wait for gambas pil pil and sunning it up in the beautiful costa del sol!
﻿
think thats all thats going on in my little life at the moment.