So I'm back in hospital after a long run of escaping this place, it's been 8 months since my last hospital admission, it seems the only thing I can't escape are the winter bugs!
Although it's been 8 months, it should have been a lot sooner, but me and my stubborn ways I don't give in quite so easy!
It's a very weird vibe being in here this time, new faces, new doctors, new nurses, new physios and what I always forget is my new surname! Been married a year November but because of the lack of hospital admissions know one knows my name on the board any more!
The ward is having a make over, mainly rooms locked and sealed up whilst decorators are in, had a little sneak peak at one yesterday...still looks clinical! The kitchen has a new microwave which is also an oven, so far haven't quite got the hang of it, my curry wasn't cooked properly yesterday although my nann bread was nicely oven cooked! Lol I think I've already given up and just sneaking into the catering kitchen at night to heat food up in there.
So I came in yesterday to my surprise, I just went up to the day ward to be seen by drs and assumed I would go on the waiting list for a bed, my lung function has dropped quite a lot to 16% but my sats weren't too bad sitting around 92 heart rate was on the higher side than normal for me 129 but I'm full of a cold, temperature the lot aswell as chest infection. My crp levels were 88 which isn't too bad considering I felt a lot worse but I suppose that's prob kalydeco working its magic!
So like I said didn't  expect to get a bed, but once I told the dr I didn't wanna do home ivs she checked bed situation and to my luck, the person who was waiting for a bed didn't answer there phone..so guess it's a case of you snooze you loose! Lol I did feel bad but god I was so grateful for this bed!
So here I am stuck down in room 1 right down the end of the ward, away from EVERYONE and also away from wifi signal so il defo be racking up my 3G usage whilst in here!
Bit pissed off today though..back to moaning old hospital George..
Today the physios have pushed all the wrong buttons for me. I always use a machine called the bird when I am admitted, but today I was told I can't have it or might not need it now I am on kalydeco. Well what a load of shit. I'm in hospital cause I have a chest infection not because I'm in here for a laugh, the bird helps me with my airway clearance and there always going on about they do whatever they can to make my life easier, doing normal Physio like the old school way is like a bloody work out, kalydeco or no kalydeco I still have 16% lung function, I'm not running marathons and I might not have declined anymore but I'm certainly not at a "normal" standard of living, I still use my wheelchair frequently, I still use oxygen, Jesus if I was loads better don't they think I would be getting myself a job and living like a normal person again, truth is I'm out of the danger zone I know I'm not in threat of dying anymore!
My biggest problem is I think too positively sometimes and doesn't always show a true reflection of how I really am, if someone asks how I am, I instantly reply with "yeah good thanks" even if I'm the worst I've ever felt, it's like a reflex to me! It's a good outlook on life but in this situation it seems to have back fired.
So after being a bit stand offish with the Physio early and refused to do my work out tiring Physio, but was quite happy to have the bird, I did have a really bad headache and laying down and sitting up and coughing constantly is tiring, she left me, so tomorrow the drs are probably going to have been told I refused Physio which isn't the case at all, so guessing this admission isn't going to be simple, feel like I could be back to square one again with drs. I'm not going to pre judge but I think they need to realise what the situation actually is!
Joys of life otherwise can't complain at least I'm still here to moan! Lol
Love love x 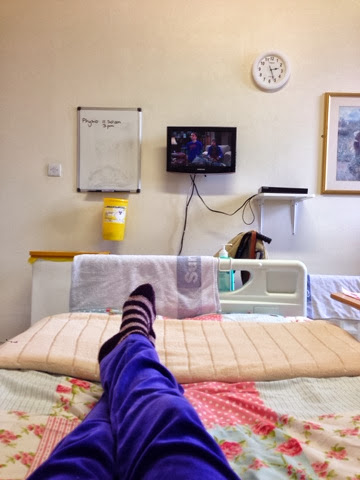