I feel crap, since clinic ive just started slowly feeling worse and worse and now im just fed up! Today i actually got dressed and left the house, the last few days ive just stayed in my pjs all day and felt sorry for myself.
I struggle breathing more and energy levels are like zero!! My appetite is non existent and fitness has not happened at all....my head really wants to get back on the treadmill and get all energetic again but my body just cant handle it, just opening and closing the boot of my car today had me gasping for breathe!!

Im hoping im just having a rubbish few weeks and il start picking up again soon, quite frankly i have lots of social events coming up so i dont have time to be ill lol.

Today i went to put in a proscription to my new local pharmacy, ive lived in Cobham over two years but finally moved to my new drs in my area (only because they chucked me out of my old one) lol but ive never had to pay for prescriptions before but has Cystic Fibrosis isnt covered on the NHS for free prescription and it is £8.04 per item and need to purchase something called a PPC which is a pre payment certificate so i just pay either £30 for 3 months or £104 for a year. but i haven't got this yet and i thought i could get it from pharmacy...well i was wrong i have to apply for it then i can use it, so if i had put my prescription in today there is well over 15 items so i couldn't afford to do that...well i could but it would be mad to waste money...i can go a few days without a few drugs, ive got a weeks worth left any ways!

Also joining my new GP and adding on all my repeat drugs, there were drugs that they wouldn't add on because they were too expensive lol one of them was Pulmyzine...didn't even realise that was expensive, then they came to my Kalydeco and i just laughed and said well thats £350 per tablet so if they wont let me have pulmyzine there's no way thats going to be added!

Luckily the drugs that i cannot get from my GP i get delivered from a different company now, which now seems to be the nebs and kalydeco.

i shouldn't really moan at least apart from £30 every 3 months i don't have to pay more!!

Anyway on a brighter note, i was feeling a bit brighter last Sunday and managed to go into London for lunch with my mum to meet some fellow CF friends we had meet over the internet.

When Kalydeco was first mentioned back in april/may 2012 to us my mum decided to go on the internet to look into it a bit more and find out how people were on it and got in touch with people on a fb group, that is were Teresa contacted my mum to tell her how great the drug was and they were fighting for it for there daughter savannah.

So we had the lovely pleasure of meeting the both of them whilst they were over here in the UK visiting.
We had a lovely lunch and some bubbles to celebrate us both being on Kalydeco and how well were doing!! 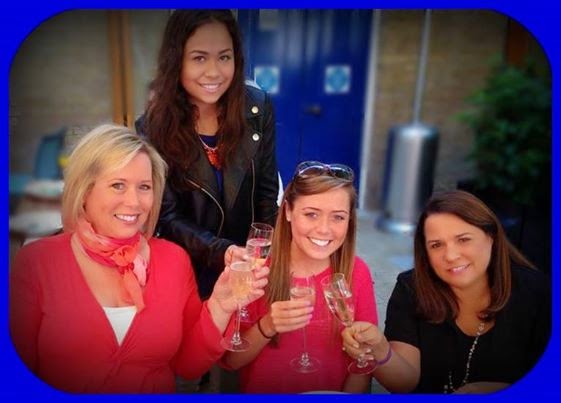 So had my little clinic appointment today which I was kinda looking forward to as I've been working my arse off to be healthy at the moment plus exercising which is so unlike me, since leaving hospital I haven't had any days were I've just sat In all day and done nothing, but it's felt good.
So last few days I haven't been feeling as well as I could be but still kept going, despite this I had high hopes for clinic results!
So I get there, get weighed that was highest for me In God knows how long 41.2kg! So I was thinking sweet that's good bring on lung function...
Physio comes in, I'm all buzzing to tell her that I've actually carried on with exercise at home and not given up like I usually do after leaving hospital! So I do my lung function-22% 😔I thought right stand up really go for it first one might be a warm up..22% again 😭 proper gutted!
I'm trying not to be too hard on myself, Rome wasn't built in a day and it's just numbers, I'm better than I have been in a while it's just so frustrating when you want something so bad, my last lung function was 26% but I was on steroids and ivs so I knew it would drop a bit just was hoping not that much.
Anyways onwards and upwards it's just going to push me to work these lungs harder and my weights good so that's a boost!
That's all from me
Love love
Xx
Posted by George aka Sprog at 18:20 No comments:


As usual thanks to kalydeco and maybe a little help from steroids this tim and a mix up of different ivse, I made a quick turn around and left hospital on day 7 to continue another 3 days of ivs at home!


My sats stabilised back up to 94-96%, lung function increased to 26% that's the highest its been since starting kalydeco and a great increase on my admission of 18% ,my weight jumped up to 40kg within a few days of being on steroids!
I continued my steroid dose at home until I finished ivs then lowered the dose by 1 tablet every 3 days until I finished.


I have been non stop since I left hospital, I haven't sat down, I love this feeling of having so much energy and lungs not stopping me so much from doing things...or at least as much, I still sound awful but feel great so I don't care!
I have to admit after finishing steroids I have noticed my energy levels dipping and I have gone slightly tight but im not relying on steroids, I never have and I never will until I have a transplant!


So im really trying to keep healthy at the moment and push my body, like I said I haven't sat down or had any "bad days" really yet apart from being a bit hung over after the bank holiday haha


ive started using my parents treadmill. now to others it wont seem a lot but for someone who does NO fitness its a start and im not running before I can walk! so I been doing 20-40 mins every other day 2 mins of fast walking then 2 mins of slow walking on oxygen as I cope better and already im starting to feel the benefit! my legs feel bit stronger and its like doing an extra physio session which is good for these old lungs of mine!
also sometimes I wonder when im walking around and getting tired if its not only my lungs but lack of fitness, it must play a part so hopefully doing this little bit of exercise will help me a lot!
I have clinic next week so really hope my lung functions still up or would be a miracle if it had gone up even more!! thinking positive!


that's all I have to report